World Rugby have announced they are re-branding future Women's Rugby World Cup tournaments as they m...

World Rugby have announced they are re-branding future Women's Rugby World Cup tournaments as they move towards gender-neutral tournament names.

The same format will also apply to the Rugby World Cup Sevens tournaments, where the men’s and women’s events are held in the very same host city at the same time.

Speaking on the announcement, World Rugby Chairman Sir Bill Beaumont said it was a historic move towards equality in the sport.

“This announcement demonstrates our ongoing and unwavering commitment to advancing women in rugby both on and off the field in line with our ambitious strategic plan.

“Unintentional gender bias in sport is an ongoing issue. As a global sporting federation we need to be leading from the front on the issue of equality. By adopting gender balance in the naming of men’s and women’s Rugby World Cup competitions, we are setting new standards in equality in rugby.”

World Rugby have said the purpose of the move is to elevate the status and profile of the women's game, putting its branding and naming on a level footing with that of the men's game.

The football equivalent is still called the FIFA Women's World Cup, with rugby setting a precedent for a major sporting organisation.

World Rugby have also been keen to point out an increase in interest and participation in women's rugby in general.

They ay participation levels are at an all-time high with 2.7 million players globally – making up more than a quarter of the global playing population.

This includes a 28 percent rise in registered players in the last two years.

Meanwhile, for the second year running, more young girls have taken up rugby worldwide than boys and over 40 percent of rugby’s 400 million fanbase are female. 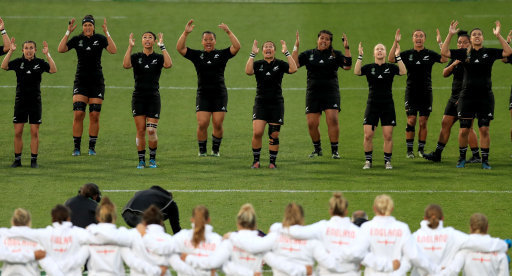 The New Zealand team perform the Haka during the 2017 Women's World Cup Final at the Kingspan Stadium, Belfast

“This is much more than an initiative – it is the ultimate statement of equality and a first for sport. I am excited about this landmark decision, but this is the beginning of the journey. Together, we are working hard to do something very special for women, for the game.”

World Rugby Chief Marketing Officer Marissa Pace added that the organisation were keen to lead the way on gender equality in sport.

“World Rugby is clearly committed to equality in our sport and we decided that we no longer need to identify our marquee events with a gender bias from a brand level. Our three World Cup events are the pinnacle of international rugby and we wanted the focus to be on the event and the athletes, not their gender. We’re very proud to be leading the sports industry in this space.”

New Zealand won the most recent Women's tournament in 2017, with a 41-32 win over England in the final in Belfast.

Ireland lost a seventh-placed playoff 27-17 to Wales in the same tournament.