Cork rider is racing in his first ever grand tour

All three were part of a breakaway group that also included Gianluca Brambilla (Trek-Segafred0) and Eros Capecchi (Deceuninck-QuickStep). Jan Polanc (UAE Team Emirates) was dropped by leaders before finishing in sixth position. However, the Slovenian did enough to claim the leader's maglia rosa from previous leader Valerio Conti.

Dunbar is riding his first ever grand tour, and was only a late addition to the Team Ineos roster. The 22-year old replaced Egan Bernal who was a late withdrawal after suffering a broken collarbone in training.

Today's stage was the first to feature a first category climb, a near 9km ascent to the skiing town of Montoso. Dunbar told Eurosport after the stage it was that climb that set him up for the possibility of a stage win, "I thought if started to back I can see who's strong. Normally when guys are feeling it on the climb like that they ease back quickly. So, I waited, took in who was strong and knew if I got to the top two there was a chance. And I did that but just came up short." 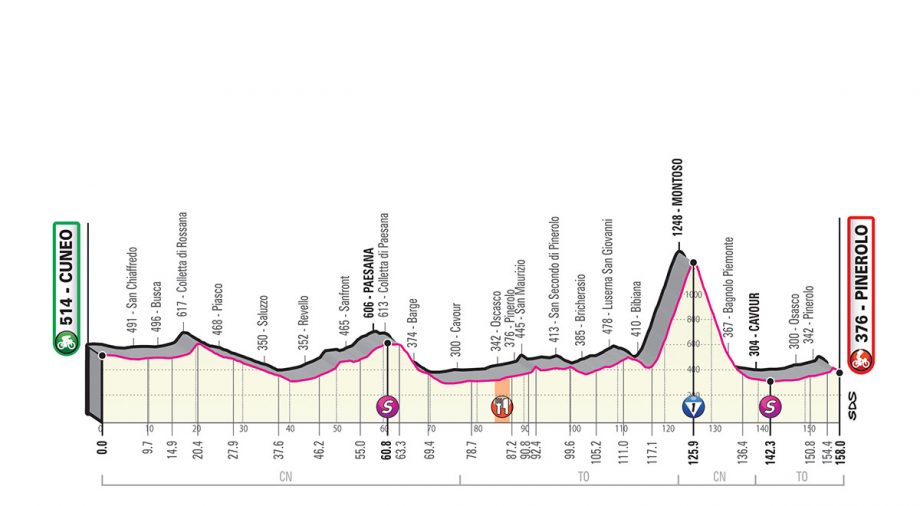 Benedetti took the stage win after a short three-man sprint to the line in Pinerolo, which in itself lacked fireworks, "It was just who could push the biggest gear", says Connell, "The other guys probably have that experience on me and that extra bit of endurance but it's a start for sure."

Polanc ended today with a 4:07 lead over Primoz Roglic, with Conti dropping to third. Conor Dunne is 140th overall.

Tomorrow's 13th stage finishes with a first category climb to Lago Serrù taking the riders over 2000km above sea level.