UCD students have pitched a number of tents at the University's main entrance in a protest against planned rent hikes.

The University has announced plans to raise on-campus accommodation rent by 12% over the next 3 years.

UCD students have pitched tents at the University’s main entrance in their ongoing fight against rent hikes pic.twitter.com/4D7ssMTy3w

The move has sparked anger amongst the student population.

They say the increases are locking young people out of access to higher education and must be reversed immediately. 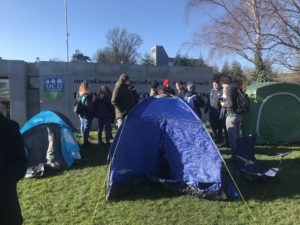 "I have students come in to me weekly saying that they are either at risk of being homeless or have just been made homeless".

Una says others are resorting to sleeping on friends couches, cars or even the airport.

Pepe Reina "ran out of oxygen" during coronavirus battle