Ukrainian President Thanks Ireland For Support In Historic Oireachtas Address

The President of Ukraine has received a standing ovation in the Dáil chamber after delivering a rous...

Ukrainian President Thanks Ireland For Support In Historic Oireachtas Address

The President of Ukraine has received a standing ovation in the Dáil chamber after delivering a rousing speech to both houses of the Oireachtas.

Volodymyr Zelenskyy used his speech to thank the people of Ireland for their support since the Russian invasion began and to welcome a "new age of understanding" between the two countries. 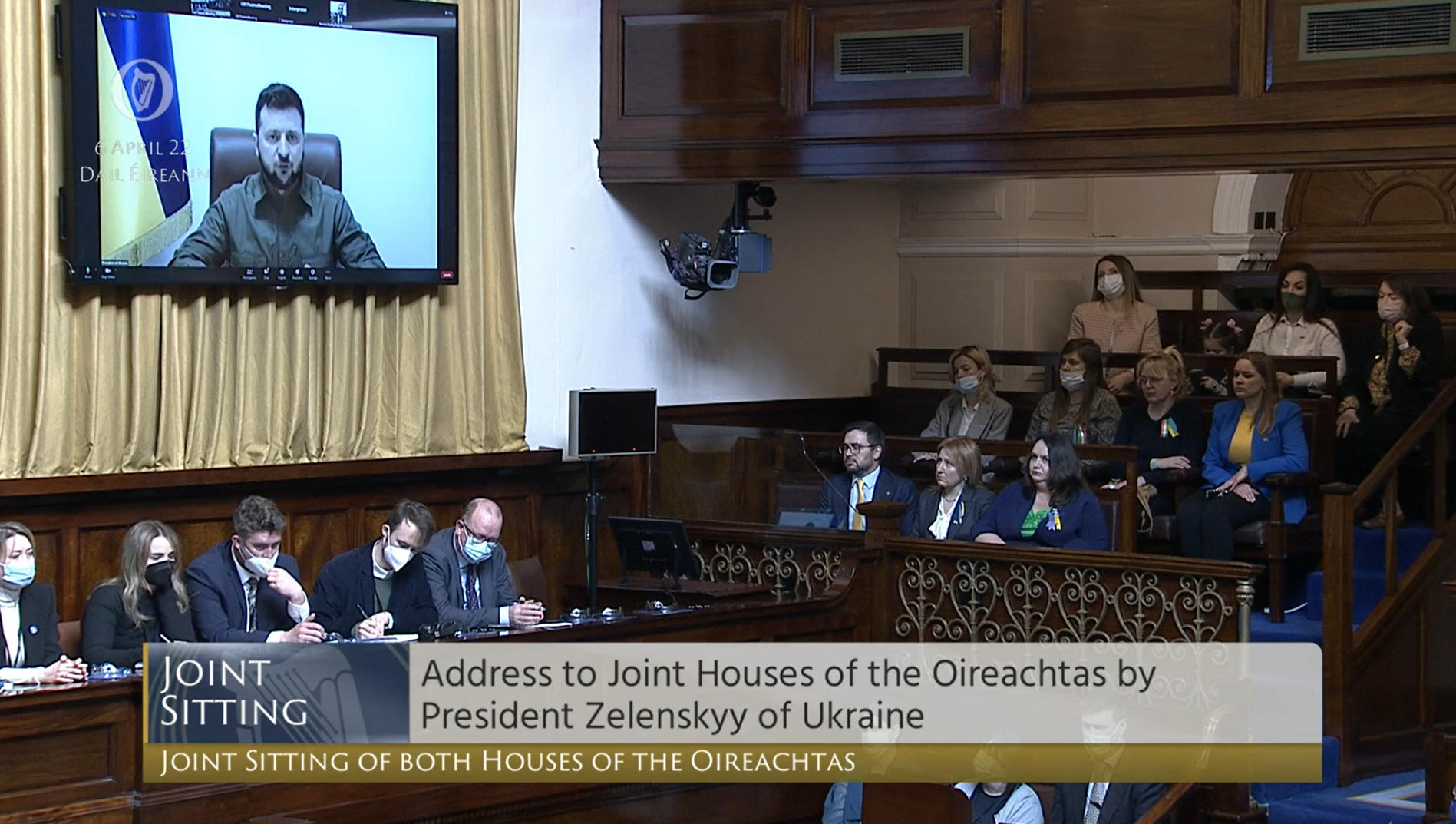 Ukraine President Volodymyr Zelenskyy addresses both houses of the Oireachtas.

He also warned that Ukraine "cannot tolerate" any more indecisiveness on sanctions against Russia given everything his country is going through.

Chair of the Seanad Mark Daly welcomes 5 year old Anastasia to the Dáil chamber. She’s here for the Zelensky address with her mother having fled Ukraine.

Her father is fighting the Russians at home pic.twitter.com/GVBQE4KD3E

"To the people of Ireland, since the very first days, you are supporting Ukraine and this is a fact,” he said.

"You did not doubt starting helping us. You began doing this right away and you are a neutral country you have not remained neutral to the disaster and mishaps Russia has brought to Ukraine

"I am grateful to you and every citizen of Ireland

"Thank you for supporting sanctions against Russia. Thank you for the humanitarian and financial support extended to our country and thank you for caring about Ukrainian people who found shelter on your land."

President Zelenskyy used the speech to set out a list of some of the most grievous crimes carried out by Russian forces since the invasion began.

He said the massacre at Bucha and the images from other towns and cities must lead to further sanctions without delay.

"Now, when we are hearing new rhetoric about the sanctions against Russia, I can’t tolerate any indecisiveness after everything we have gone through in Ukraine; after everything the Russian troops have done," he said.

"Today, when the whole world knows about the crimes against our people, we still have to convince even some European companies to abandon the Russian market.

"We still have to convince foreign politicians that we need to cut any ties of Russian banks with the global financial system.

"We still have to convince Europe that Russian oil cannot feed Russian military machinery with new sources of funding." 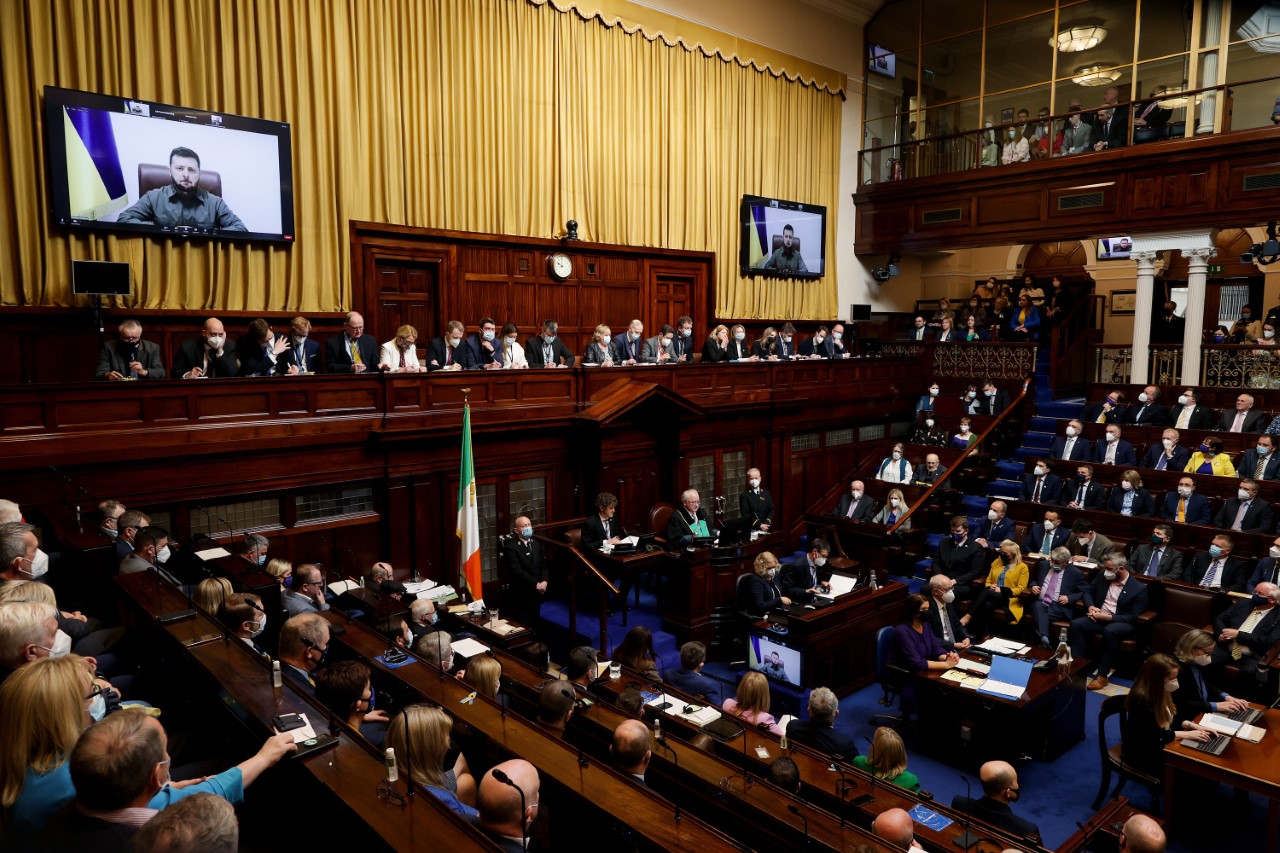 President Zelenskyy also hailed a "new age of understanding" between Ireland and Ukraine and said the two countries can equal the biggest nations in the world if they work together.

"We need to start thinking about the restoration of our country after the war," he said.

"We are inviting leading countries of the world to participate in the rebuilding and restoring of Ukraine and of course, Ireland is always welcome to do so, for example, in our Kherson Oblast.

"Your skill of valuing the lives and community development experience, your economic potential is something you are known for so let’s bring our efforts together and lets show that Ukraine and Ireland jointly can do much more than the biggest country in the world was trying to destroy.

"I am grateful to Ireland.

Sinn Féin Mary Lou McDonald used her speech to warn that it is ‘long past time’ for the Russian Ambassador to be expelled from Ireland.

The comment was applauded by most of the opposition and some among the Government backbenches.

The Ukrainian Ambassador Gerasko Larysa and some Ukrainian people living and working in Ireland were watching from the distinguished visitors’ gallery.

The Russian Ambassador Yury Filatov was invited but did not attend.

Meanwhile, the war in Ukraine by Russian forces has entered it's 42nd day - here's what's happening: