Tim Vickery has spoken of his desire to learn more about certain strands of Irish history, amidst th...

Tim Vickery has spoken of his desire to learn more about certain strands of Irish history, amidst the coronavirus crisis that has also taken effect where he lives in Brazil.

The South American football expert joined Joe Molloy on The Football Show this evening to discuss the fall-out from COVID-19 over there.

Vickery has drawn parallels between the Copa America of 1919 and the Spanish Flu of 1918, a pandemic that hit hard over a century ago.

He also spoke to us about taking some of the extra time he's had recently to learn more about Irish history at around that time.

"Every day now when I wake up I think 'It was a dream' - no it's not, it's reality. We have to use this time the best we can.

"I'm not trying to pull one over your eyes, but I spent last night, honestly now, learning all about Michael Collins and [Eamon] deValera.

"[It was] an area of history I knew very, very little about but Irish history at exactly that time and how fascinating that was.

"I remember watching the Michael Collins film when it came out in the late 90s... I caught just the end of it and said 'You know what, that's something I need to learn much, much more about'.

"I got into all kinds of articles and YouTube documentaries on Collins and deValera, and just how great Michael Collins looks from hindsight. What a colossal human being he was.

"There was so much more to him than even the film had in it, so many aspects to his greatness. One of those 'what if' moments, you know - had he survived what kind of country would your country be now?"

The Brazilian government, led by President Jair Bolsonaro, have come under criticism for their response to the crisis. 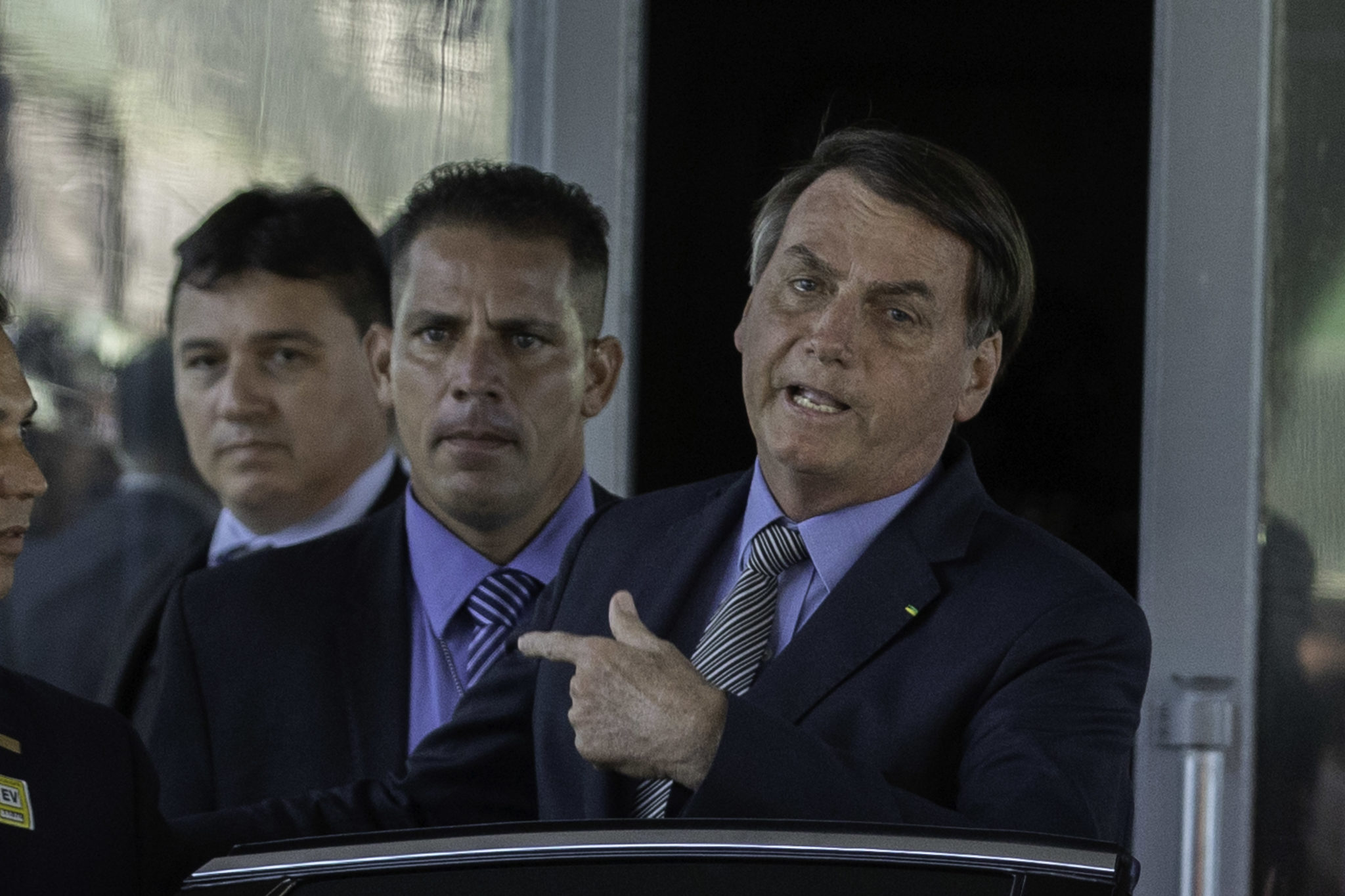 President Jair Bolsonaro leaves the headquarters of the Ministry of Economy in Brasília, Brazil on Mar. 16, 2020. Even with recommendations to remain in isolation, the president had meetings with Minister Paulo Guedes. (Photo: Bruno Rocha/Fotoarena/Sipa USA)

Bolsonaro's press secretary was confirmed to have tested positive for COVID-19 last Thursday, with 121 confirmed cases in the country as of a couple of days ago.

In protest at the lack of apparent action, players for Brazilian club Gremio took to the pitch wearing masks ahead of their behind-closed-doors state championship tie against Sao Luiz on Sunday.

"What happens now to save these people from a real economic catastrophe I really don't know.

"There are a few different strains in the Bolsonaro government. There's the absolute right-wing nutters, the flat-Earth society.

"I ain't joking, the intellectual guru of this [government] speculates that the Earth may be flat, that the songs of the Beatles were in fact written by a German philosopher in a way to bring down capitalism and western civilisation.

"Now none of these people have the answers to this kind of situation, which will require massive state action. 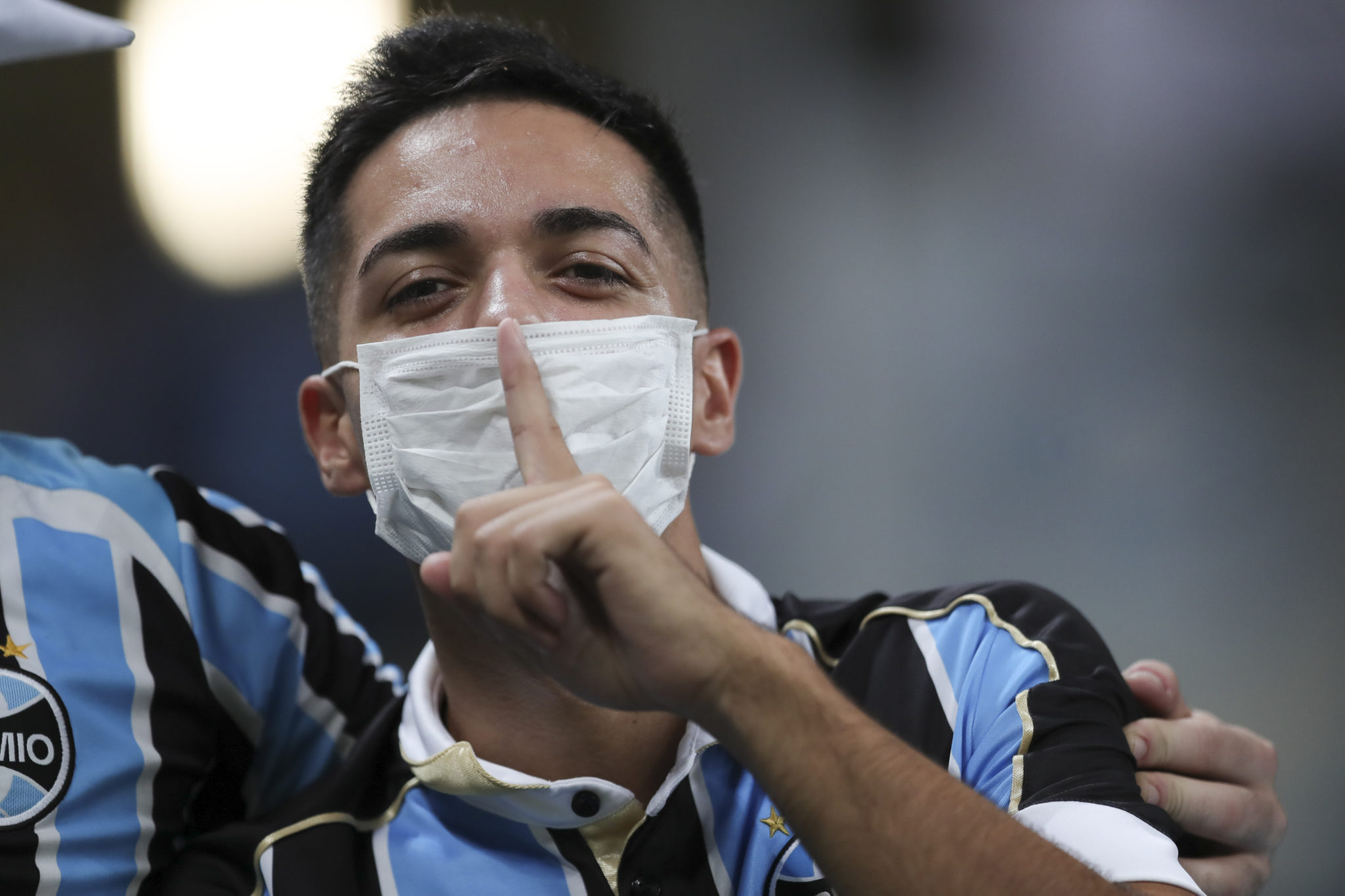 A fan of Brazil's Gremio wear masks as a precaution against the spread of the new coronavirus, prior to a Copa Libertadores soccer match against Brazil's Internacional in Porto Alegre, Brazil, Thursday, March 12, 2020. For most people the new coronavirus causes only mild or moderate symptoms, such as fever and cough. For some, especially older adults and people with existing health problems, it can cause more severe illness including pneumonia. (AP Photo/Liamara Polli)

"So whether the relevant authorities have even the intellectual material to deal with the crisis which is about to hit, we really, really don't know. But I'm inclined to doubt it."

It was put to Vickery that Latin America has at its core a tactile culture, where the sense of touch is utilised far more regularly than in Europe.

And he said that social distancing is becoming more and more common in Brazil.

"It's still very early days with this. There's a café that I'm still going to and they've taken all kinds of precautions.

"They've spread out the tables, but that kind of social practice, a hug or kiss either side, that's going to have to go.

"There are people [here] that have been doing that for sixty or seventy years. It's hard to give up those practices overnight, but the message is beginning to be hammered home."