Andy Mitten joined Ger and Eoin on OTB AM this morning, and it included a discussion around Barcelon...

Andy Mitten joined Ger and Eoin on OTB AM this morning, and it included a discussion around Barcelona's finances that he says revolve around Lionel Messi's wages.

The United We Stand Editor says the focus on the Argentine striker's pay-packet, and the impact that has on the rest of the club, is far from a solid business model.

"Barca's political problems are rumbling on. I've suspected for a long, long time, and more than suspected [as] I've had it well-sourced from good people, that Barca are really struggling financially.

"This is really coming to the fore now. They've got a huge wage bill, they've bought really badly, they've bought three players above €100 million that haven't really worked out for them.

"They've got to sell. I know people at quite a high level in the club who for a long time have painted a picture that they're trimming everything back just so they can pay Lionel Messi.

"That never seemed like a stable business model to me - although he's clearly the best player in the world and he's brilliant."

Mitten says tactical contract negotiations are a common thread at all big football clubs, and not least at Barcelona.

"Basically the players have held the club hostage for years, they realised that if they went public at the point of negotiating a new contract they tend to get a new contract.

"I looked at Barca as this perfectly run football club - maybe perfect is the wrong word. Fans had power, you voted in the President, and the closer I get to it it's like the closer you get to the Sun.

"There are so many shifting plates of power that basically it's quite unstable. This model where the President... they're the only people that get voted in... they're not real fans, it's rich people that have got the contacts to run a campaign.

"It's an extremely political club with factions all the time. I lean away from it the more I learn. I don't think it lends itself to long-term projects.

"The re-development of Camp Nou still hasn't started because whichever President does it on his watch, and spends three, four, five, six hundred million, they're going to have to pare back spending on the first-team. Which means probably a lack of success, and no President wants that on his watch."

Mitten says fan impatience is another issue at the Catalonian club.

"What I've also seen in the last few years is the rise of the fans of the super-club - incredibly impatient, online fans, scattered around the world, whose viewpoints are completely different from people who actually go to the games.

"You see these Barca fans online, and if they're not top and winning every game 5-nil, and winning the Champions League, they're absolutely furious! It's completely ridiculous!

"I think that held sway in sacking Ernesto Valverde, while his team were top of the league - having won the league last year and the year before. It was just ridiculous, the bar has been raised so high that I don't think any football club in the world can reach the levels.

"There's tension between the players, in an ageing team. I don't think the current manager can even start to play the type of football he wants to play because players will just turn around and say 'this is not how we do it here.'

"[It's] still a huge club, still extremely attractive, Barcelona's a great place to live. But I don't think it's a financially stable model, and the virus has just exacerbated the issues at Barcelona which are coming to the fore now."

The La Liga giants have been criticised in the past for their high ticket prices, and Mitten says that is another aspect that leaves a sour taste.

"It just makes me think all this 'More than a club' stuff... it's a little bit hollow. You know when they're charging visiting fans more than any other club in the history of football for away tickets. 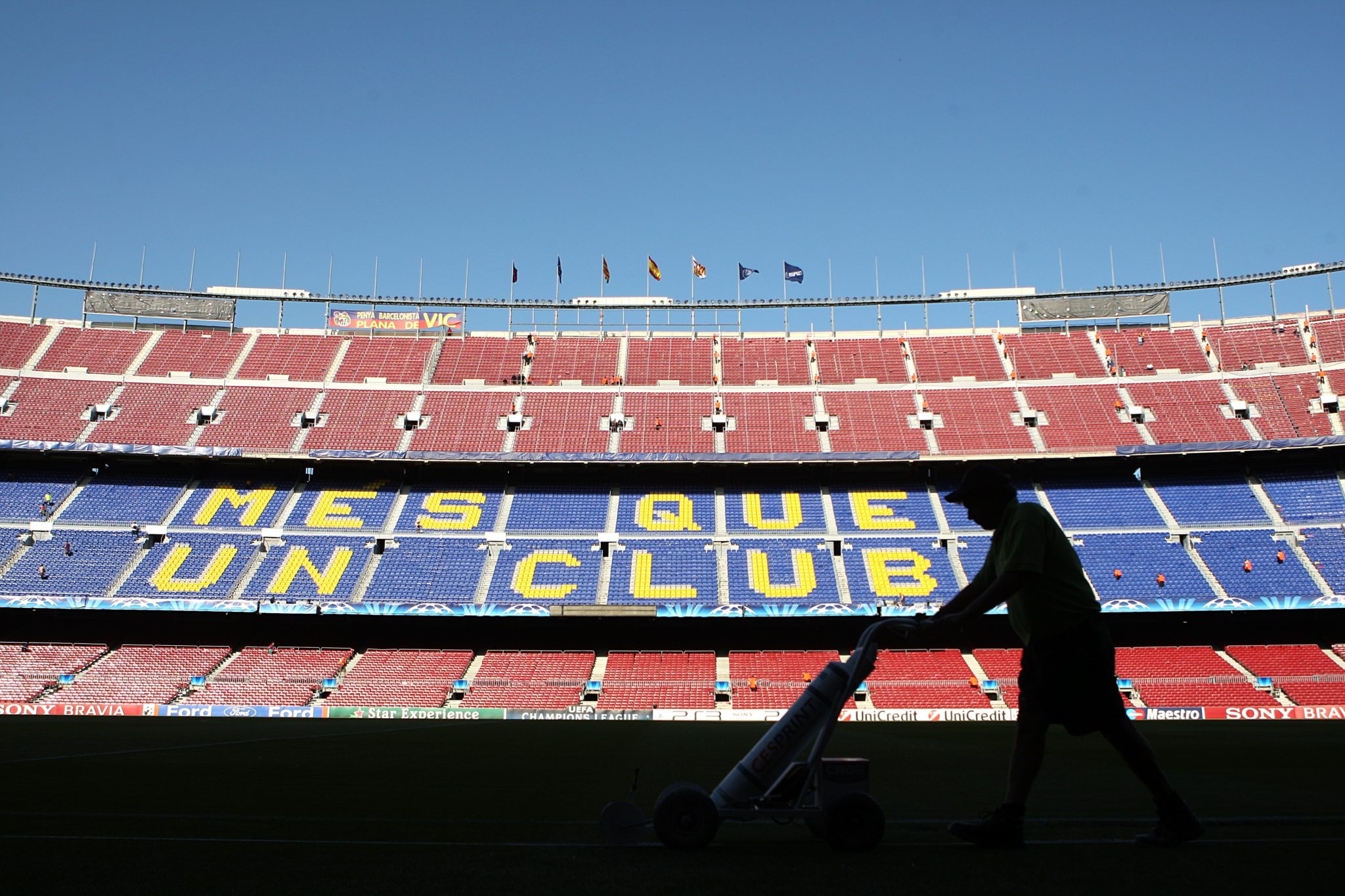 A groundsman marks out the lines before the game

"I just think 'More than a club' are you? Yet you're charging €129 for Man United, or for Tottenham, or for Manchester City fans to visit your stadium. Stuff like that tarnishes their image."

Andy also told us he was using his time in quarantine to speak remotely with a number of footballers, although some are more willing to talk than others.

"Some footballers I find are keen to talk, others are not keen to talk. I spoke to footballers in Italy, I spoke the other day to Federico Macheda... he's in Athens, it was the anniversary of his goal against Aston Villa. And he was fine talking!

"I've spoken to a couple of other lads who play in Italy, a couple of lads who are on loan from Man United... they just want a low-profile at the moment. I suppose you've got to respect that.

"There are more important things happening than the resumption of a football season."