The Páirc Uí Chaoimh pitch is to be replaced, with work beginning at the Cork stadium next week.  It...

The Páirc Uí Chaoimh pitch is to be replaced, with work beginning at the Cork stadium next week.

It means Cork's last Super-8 meeting with Roscommon on August 4 has been moved to Páirc Uí Rinn.

The surface was deemed "unacceptable" after chewing-up badly during a league double-header on February 3. Cork GAA chairperson Tracey Kennedy conceded that month that a full pitch replacement would be required and would happen after the Munster hurling and football championships.

The Board of Directors of Páirc Uí Chaoimh and Cork County Board today announced an agreement with SIS Pitches Ltd. to completely replace the surface with what they describe as "a new reinforced pitch, incorporating rootzone and surface reinforcement, bringing it in line with the most up-to-date pitch construction technology and performance available today".

While the cost has not been revealed, The Irish Examiner claimed earlier this year that replacing the pitch could cost as much as €2m. 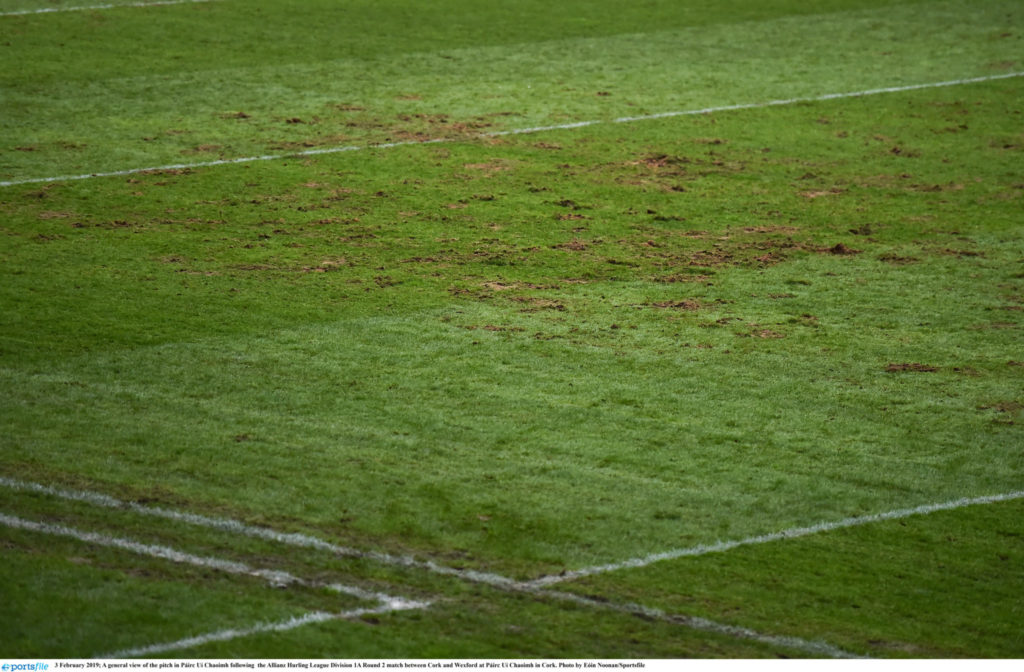 3 February 2019; A general view of the pitch in Páirc Uí Chaoimh following the Allianz Hurling League Division 1A Round 2 match between Cork and Wexford at Páirc Uí Chaoimh in Cork. Photo by Eóin Noonan/Sportsfile

The state of the pitch in February angered many given the talk of the Páirc's estimated cost standing at €95.8m which was €10m more than expected. Today's statement claims the tender price of the new pitch "has come in within the amount allowed in the €95.8m estimate of costs announced earlier this year."

It's hoped the stadium will be open and able to host all of Cork's home games in the Allianz Leagues in 2020. Work is due to get underway the week commencing July 22.

Speaking today, Tracey Kennedy said, "We cannot ask our teams and supporters to endure another season where our flagship stadium is unavailable to host the games it was built for, and it is absolutely critical now that we have a high-quality, winter-proof pitch available to host all of the inter-county and club fixtures that we wish to play at Páirc Uí Chaoimh each year.

"I am confident that SIS will provide that for us.

"I acknowledge and share the disappointment of many that our Senior Footballers cannot play their home All-Ireland Quarter-Final Phase 3 game against Roscommon in Páirc Uí Chaoimh, and if there was any way in which the match could have been accommodated without risk to the future success of the new pitch, it would have been done.

"However, our focus has to be on safeguarding our pitch for all our teams far into the future. We look forward to welcoming our own and our visiting supporters to Páirc Uí Rinn for the game."

For those interested in such sexy features, today's joint-statement lists the key benefits of the new pitch as:

● The future-proofing of a pitch profile construction for many years to come through the use of new technology (gravel raft) and completely new materials that must pass rigorous specification criteria.

● Providing a reinforced structure of pitch profile and surface to significantly increase the underfoot stability for all players, particularly at times where grass growth is curtailed due to temperature and light conditions.

● To provide a pitch that can facilitate double-headers/multiple matches with little if any decline in performance.

● To provide the ability to play more club matches particularly at the back end of the season when growing conditions are typically more challenging.

● To provide a synthetic surround that reduces damage to the playing area through the turning of maintenance equipment.

● To provide a synthetic surround that creates the opportunity to increase sponsorship opportunities with removable 3D logos etc for individual matches.